Whether your job involves sitting at a desk for 8 hours or lifting heavy loads – most can agree that if you’ve been working, you need a break. But we may not be taking as many as we need to feel fully rested and ready to go. 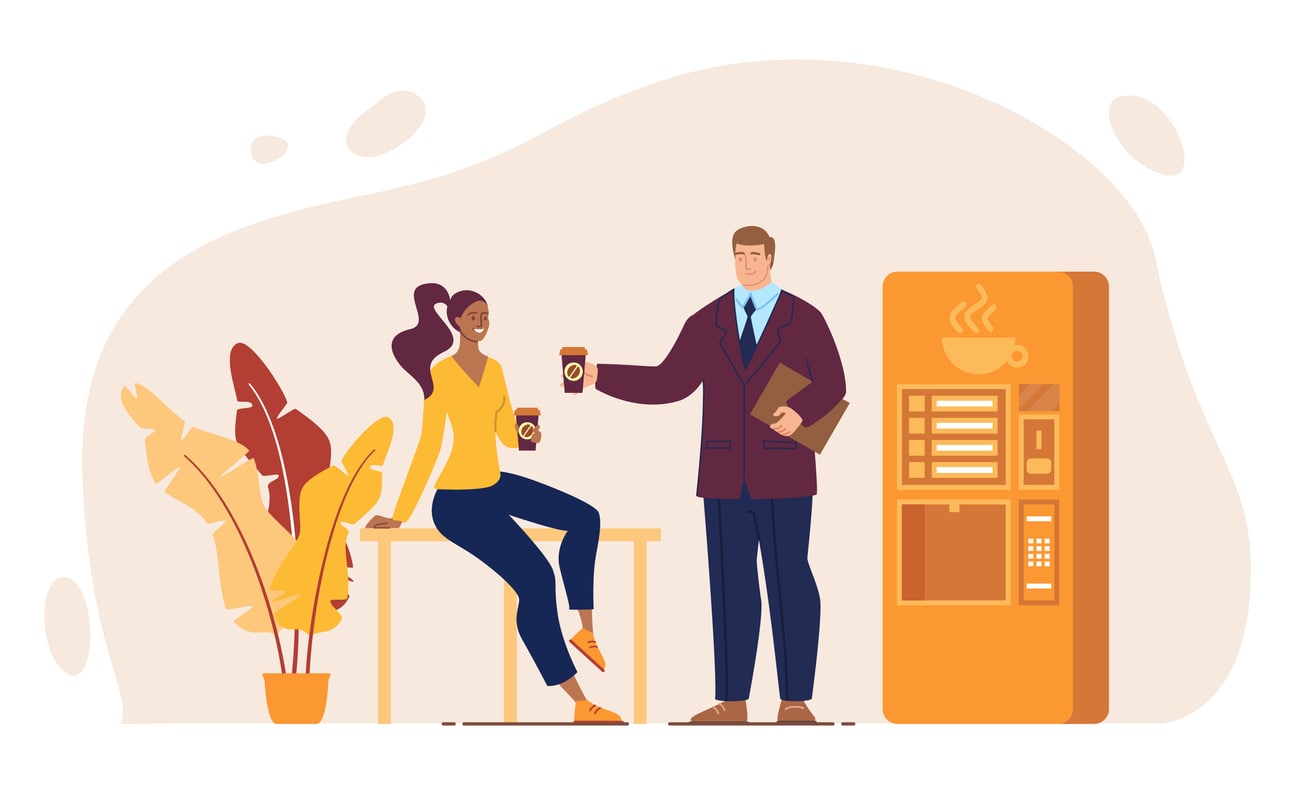 It’s been well over a year since the COVID-19 pandemic began and this historic time has certainly had an impact on how we work, how we feel about our time at work, and our productivity.

As coffee experts, we’re interested in the moments we take for ourselves to recharge and feel ready to get back out there. We surveyed more than 1,500 Americans about their employer’s break policies, what they do on their breaks, and how productive they feel they truly are. 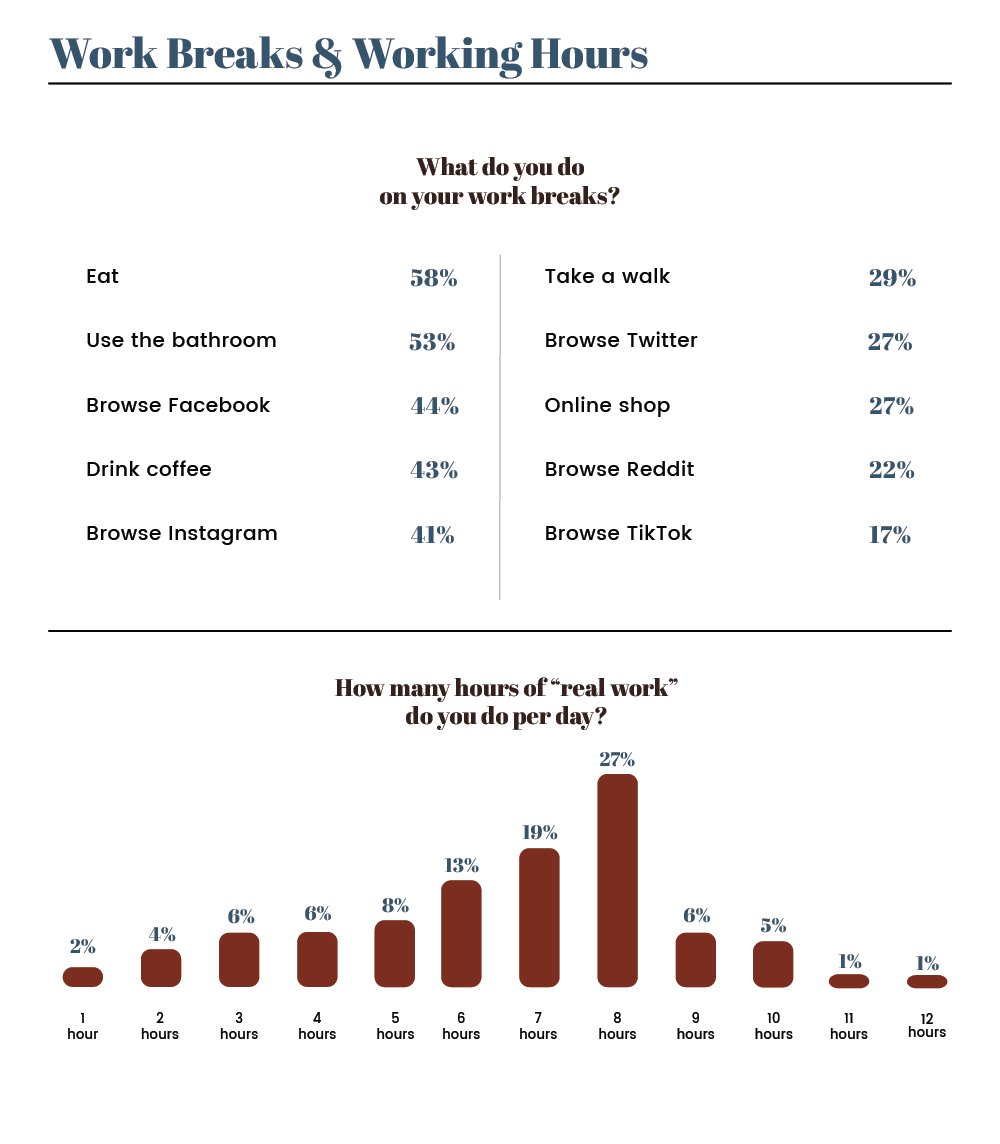 We began by asking our survey respondents about how many hours of “real work” they tend to do every day. Interestingly, the majority of respondents truly believe that they work a solid eight hours per day, despite the fact that the standard American work day is eight hours – implying that there’s truly eight hours of work to do daily, and that they rarely take breaks.

Despite reporting that they feel they work a solid eight hours per day, an overwhelming 65% of respondents feel that they must find ways to “look busy” while working a standard eight-hour office workday!

Additionally, 44% admitted to leaving their desks and “hiding” in the bathrooms at their office to kill time and get through their eight-hour days!

While we may want to believe we’re working the entire day at max productivity, our habits tell another story. 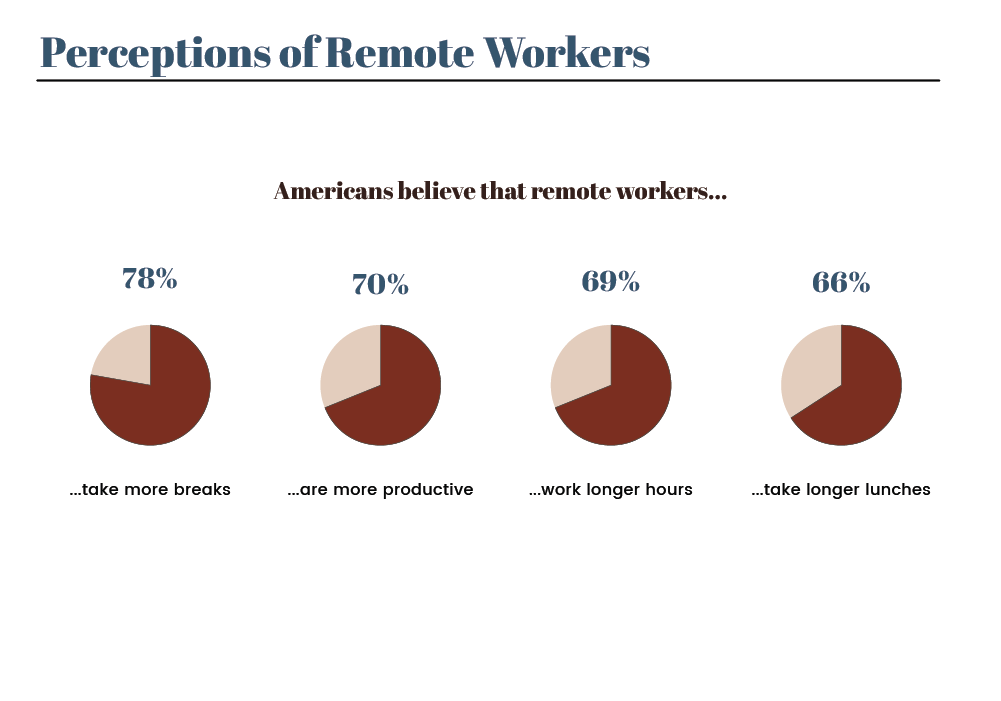 Remote work and breaks are a tricky subject for employers and employees alike. For one, it’s implied that if you’re working from the comfort of your own home, that you can take a break when and where you need it. While that may be the case, how does this impact our productivity? 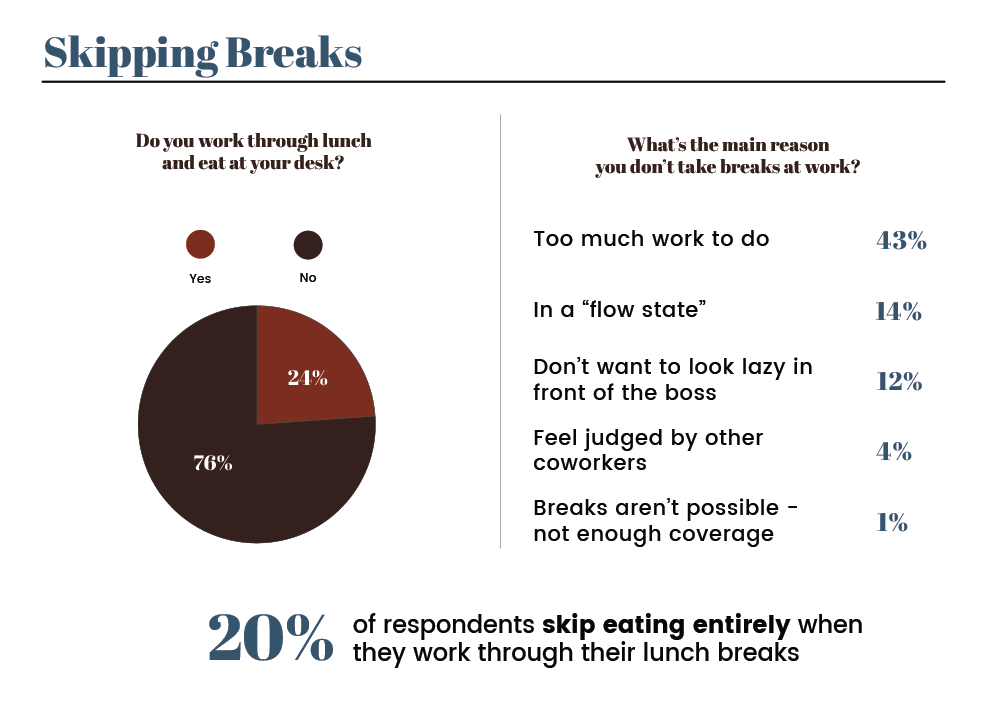 Skipping work breaks (especially lunches) and being “incredibly busy” is as American as apple pie.

Nearly a quarter of our respondents eat a “sad desk lunch” and 20% admitted to not eating anything at all when they initialy claimed to “eat at their desks” while working through lunch.

When we asked our respondents why they tend to skip breaks, they reported having too much work to do (43%) as the main reason. Fourteen percent claimed that they didn’t want to stop a project due to being in the “flow” and 12% just don’t want to look bad in front of the boss.

While incredibly low, it should be noted that 1% reported that breaks simply aren’t possible where they work, which is an unfortunate reality for many workers.

When asked if they had ever had a job (non-remote) that did not give any breaks at all, over half reported that they had. Interestingly, only a handful of states federally require an employer to provide work breaks in the United States.

Moreover, 63% or respondents said that they would continue to work at a job that did not provide any breaks despite the unfair work policies.

So far, American workers have admitted to making up work to look busy, hiding in the bathroom to waste time, and when asked if they’d ever lied about being smokers in order to get more breaks? Well, 32% said that yes, they had.

Twenty-five percent of respondents reported taking two smoke breaks per day (implying that there are some that take less, but many that take more than two!) and a quarter of them make a social activity with other coworkers.

So how much are smoke breaks costing American employers? Respondents reported each smoke break, on average to be ten minutes. At two smoke breaks per day, American smokers are using up 4% of their workdays on smoke breaks, and if an employer has many smokers (or people who simply claim to!) that could add up.

It looks like Americans are torn on how they feel about how productive they are and the breaks they’re taking. We’re admitting to skipping lunches due to feeling overworked, but still rush to bathrooms to “kill time” or look busy.

If you find yourself needing more breaks at work, consider working remotely, or in a pinch, just take a coffee break!

Feel free to use this data and research with proper attribution linking to this study. When you do, please give credit and link to brewsmartly.com. We’d love to continue this study and track data over time! If you’d like to contribute to the study, click here!