You love coffee — everyone loves coffee! — but how much do you know about coffee?

Coffee isn’t only the second most-consumed drink in the USA after water, it’s also an interesting subject historically and culturally, tying together coffee drinkers across the world and across centuries.

Plus, coffee is a truly huge part of the global economy!

I’ve scoured the depths of the internet to find information on the history of coffee, how we drink coffee now, and the trends to keep an eye on for the future.

Coffee is an interesting industry, because it’s been in a state of permanent growth for many years. And yet, as we become more aware of supply chains and the environment, and as our tastes change, there’s plenty of upheaval in the world of coffee year on year.

Whether you want a specific coffee stat or to deepen your knowledge of the caffeinated elixir, this is the place for you.

So grab a mug of joe, and settle down! I’ve done the work, so you don’t have to.

From how coffee was discovered, to how it is consumed in the USA today, this is a guide that will make every coffee lover into a coffee expert…

If coffee originated in Africa, how did it end up being consumed worldwide on a daily basis? It’s a complicated story… 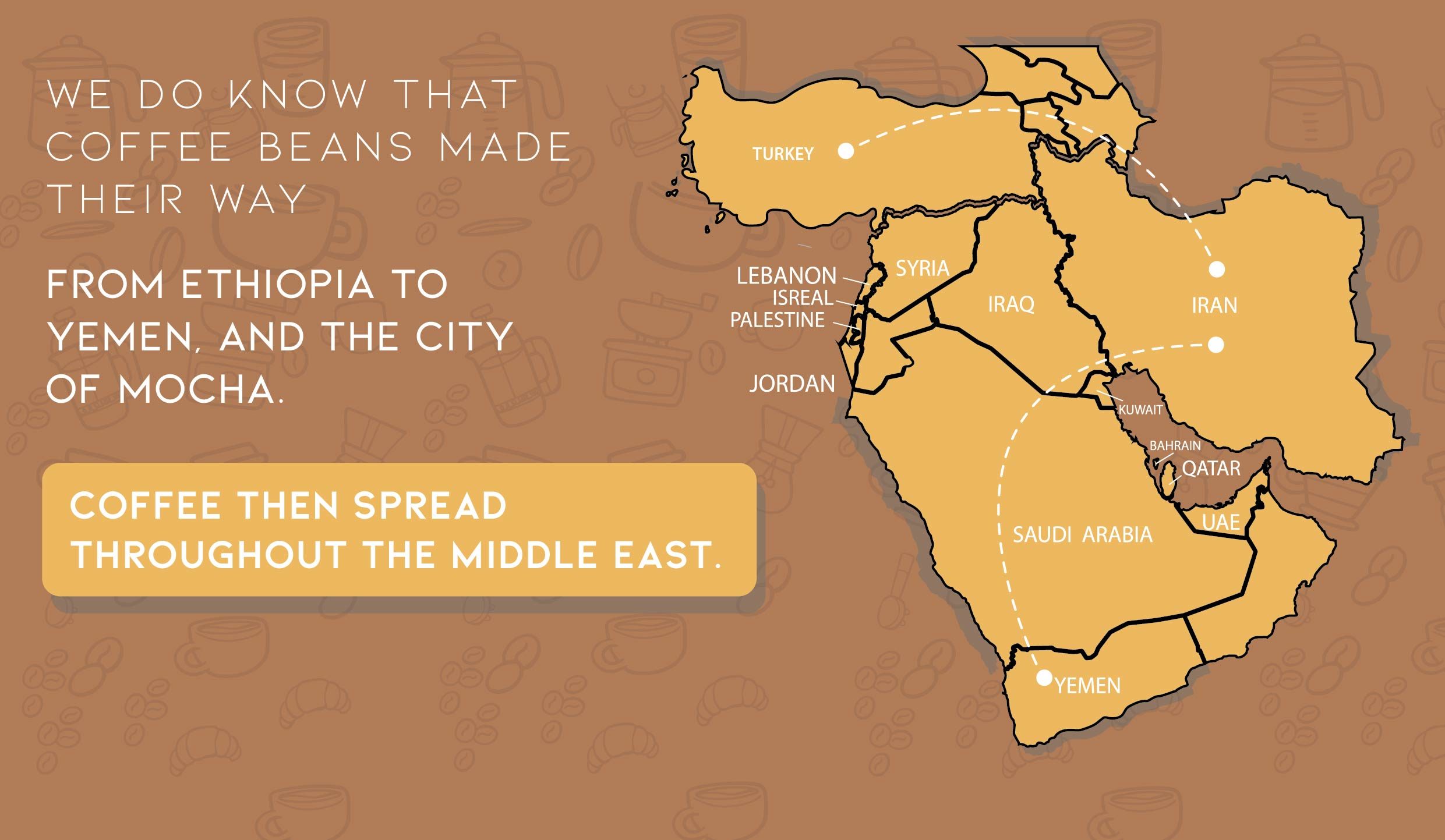 How do Americans consume coffee — the most popular beverage in the country bar water — and how is that changing? I look at how we drink coffee both at home and outside the home, and how we compare to other countries worldwide. 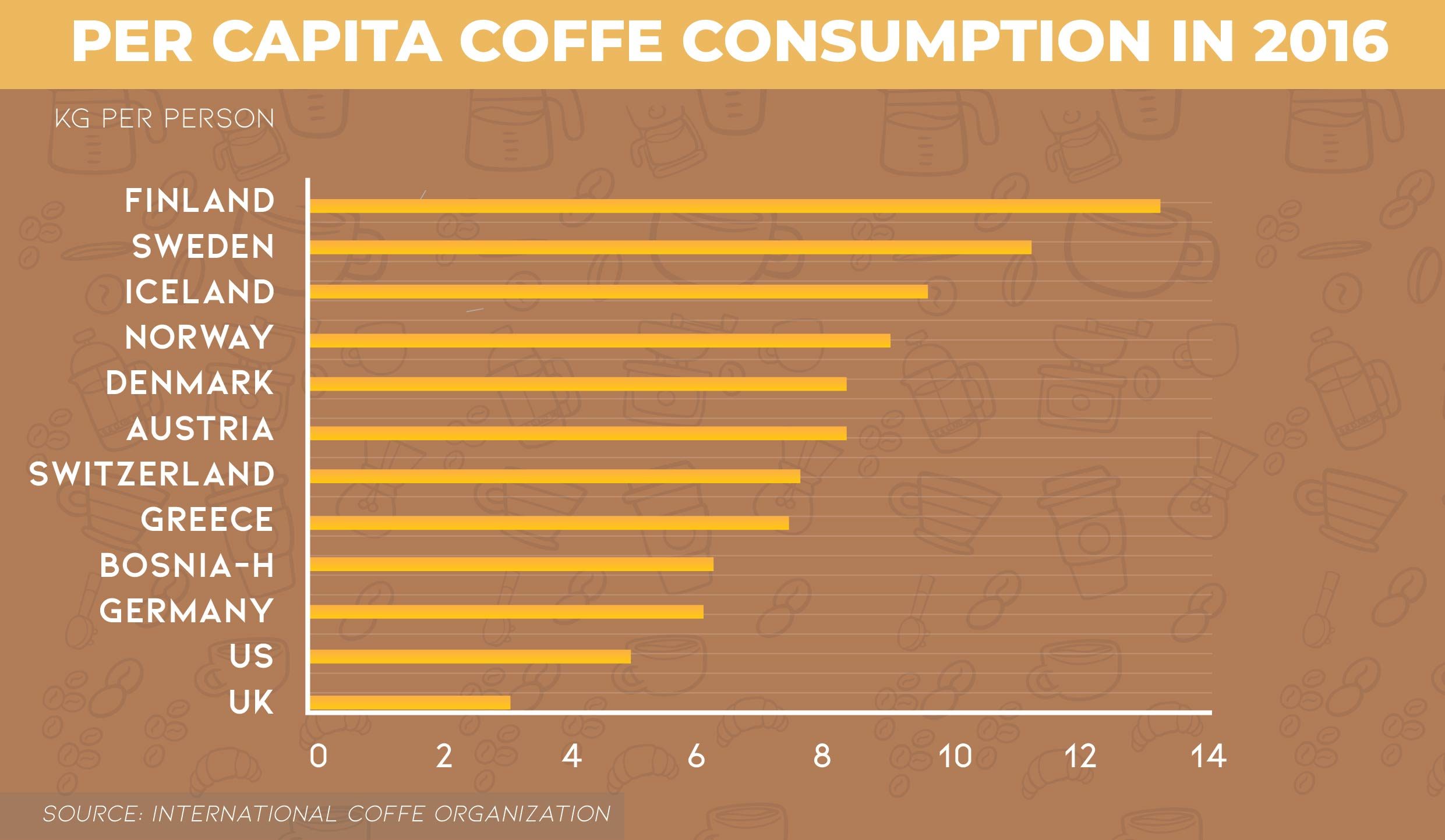 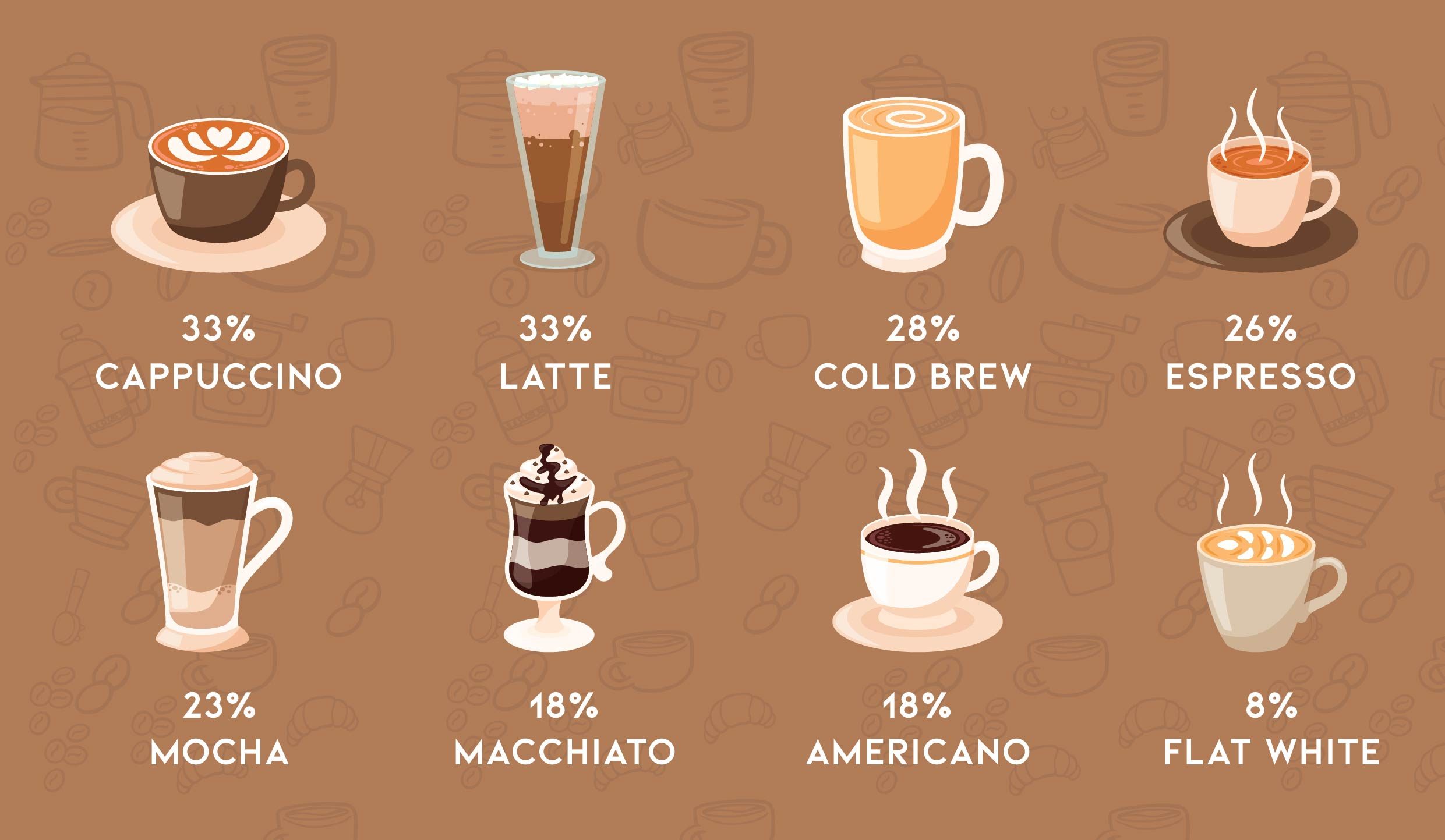 As gourmet coffee grows in popularity, the way we make it at home is in flux. Gone are the days of being fine with any brown liquid that wakes us up — with the range of coffee-making equipment now on the market, it’s only a matter of time before every American is a coffee aficionado.

Coffee, overall, makes money in the USA. Revenue has been growing every year for over a decade, and yet a few obvious names still control the takeaway coffee market.

No matter what your job is, I bet you sometimes get a bit tired towards the end of the day. Or bored. Or want to stretch your legs. Or have a chat with a work friend. Or… well… all the other reasons to get up and head over to the coffee machine!

After crude oil, coffee is the most sought-after commodity in the world. The coffee plant originated in Ethiopia, but coffee is now grown throughout the global south. Specifically, coffee likes mountainous environments, so the Americas are great for coffee growing. Perhaps that’s why 67% of the world’s coffee comes from there (most notably, Brazil, the world’s biggest producer of coffee)! As our awareness of where our food and drink comes from grows, coffee-lovers are beginning to think more carefully about their drinks’ production and origin. 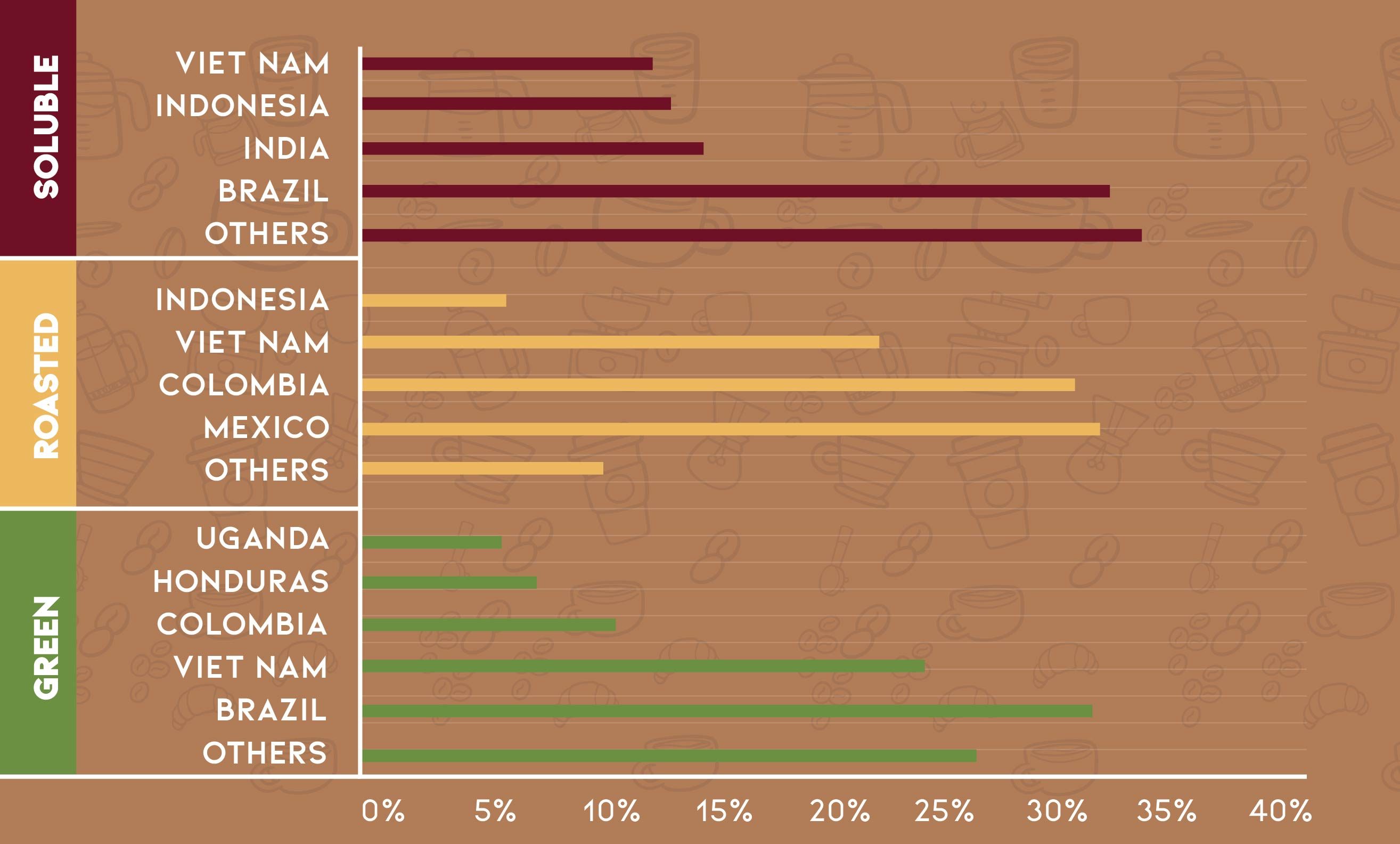 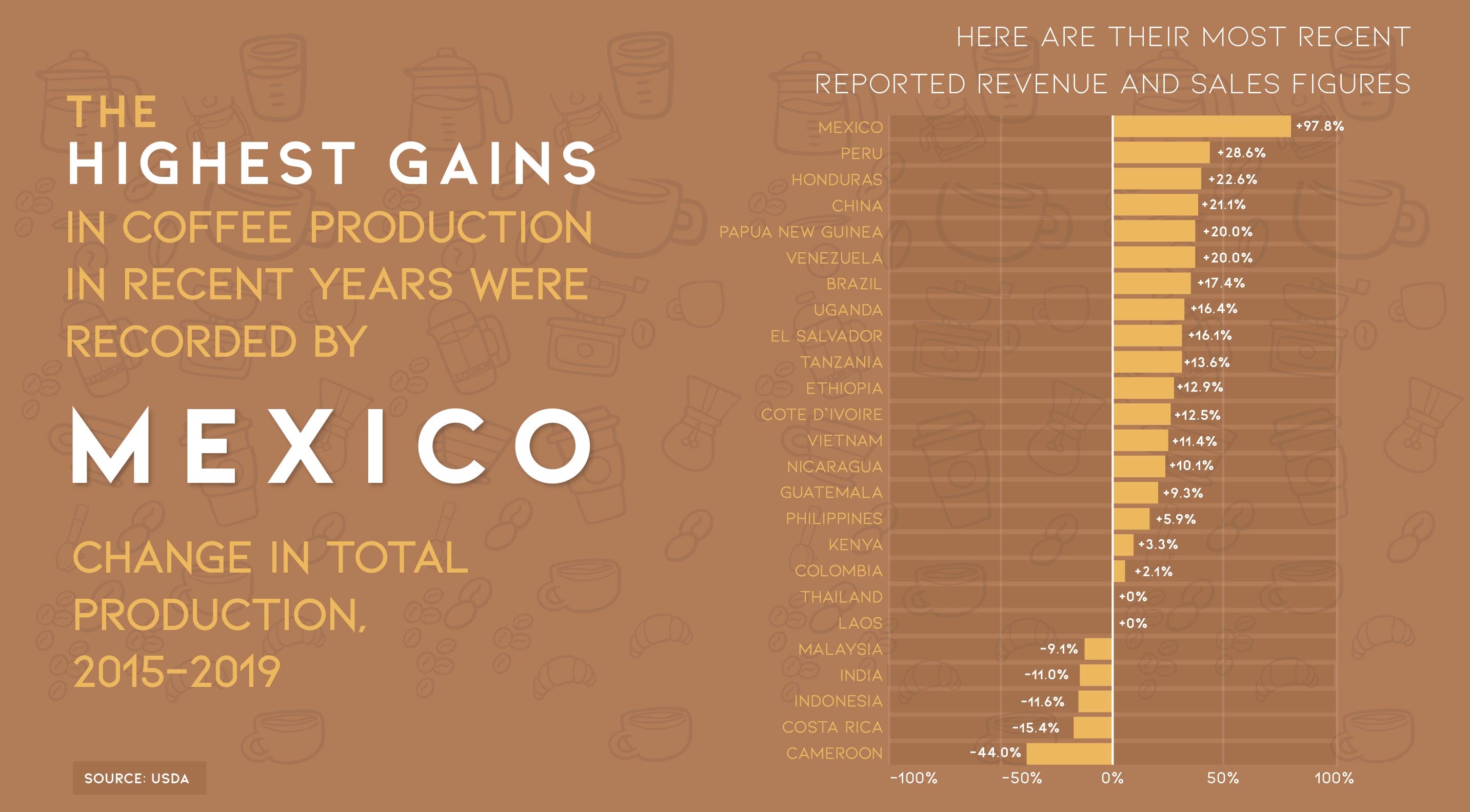 Takeaways (milk and sugar are over by the door)

That was a lot of information, I know. I’ve tried to avoid the really obvious ‘fun facts’ about coffee here and instead looked at coffee production and consumption on a macro level.

Clearly, coffee is a pretty healthy industry. Year after year, revenues are rising, with only a small dip so far for 2020s twists and turns. There are negatives, though, many of the countries that produce the most coffee don’t see much of the money involved in the industry. That’s because the money is at the other end of the supply chain — it’s being made by the companies roasting beans and selling to consumers.

Of course, buying Fair Trade or Rainforest Certified helps, and is something we can all do. Many coffee companies have further schemes for helping farmers, so do look out for those.

In the USA, the way we drink coffee is changing. Older Americans drink a lot of coffee, but they do so at home. Largely, they still rely on drip coffee makers with a notable uptick in the use of single-serve machines too. As millennials make way for Gen Z at the bottom of the age range of coffee drinkers, we’re starting to see that their attitude to coffee is very different.

Millennials don’t make much coffee at home, and they spend a lot in coffee shops. The conclusion usually jumped to here is that millennials are wasteful, but I think they (okay, I admit it, we) are just very short on time. Plus, we spend money on small luxuries rather than large ones.

Perhaps unfortunately, a lot of the money spent on coffee outside the home is still going to a handful of huge umbrella companies. Try to shop local! But you know, I don’t expect to solve late-stage capitalism on my coffee blog…

Over the next few years it will be really interesting to see how Gen Z change things for coffee. There’s a huge awareness of global issues from young people, so there may well be a big push towards further sustainability and fairer trade. That being said, at present Gen Z aren’t huge coffee drinkers. Of course, this may all change when more of them move into the fulltime workforce!

Okay, obviously I’m a bit too into coffee: drinking it, thinking about it, reading about it, writing about it… but you have to admit it’s interesting. Until doing research for this piece I had no idea, for example, that coffee is the most valuable export in the world after crude oil. That’s a big fact. Coffee, as a drink and an industry, spans the whole globe. It’s nice to think that you could share a cup of joe with a coffee farmer from Brazil or Vietnam and bond over it. While it’s clear that our attitudes to coffee are changing, with younger people seeing it more as an experience and an artisanal product, we can at least be happy about the fact that it’s clearly around to stay pretty much forever!