Coffee with chicory is an excellent alternative for coffee lovers who want to cut down on their caffeine intake. But, is chicory coffee healthier than standard coffee? Keep reading to find out! 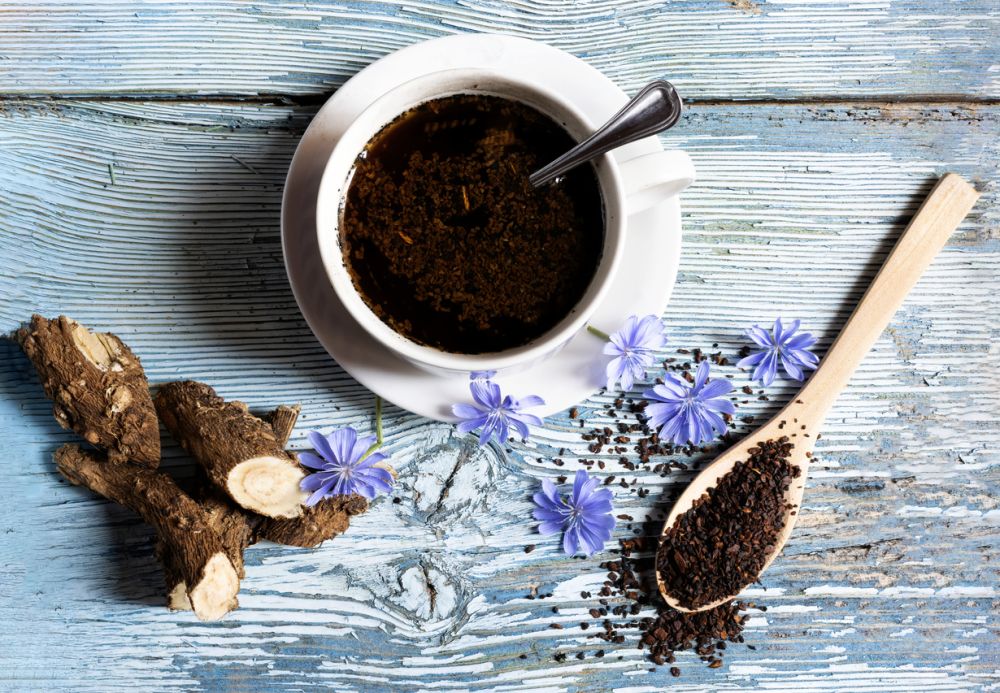 Coffee substitutes and adulterants have been used since coffee beans were first roasted and brewed. And the chicory root has been used as a coffee additive or coffee extender for centuries.

Not everyone knows what chicory is or what makes it a good coffee substitute. And that’s where this article comes in handy.

We will be discussing the history of coffee with chicory and how it became a popular coffee additive.

Let’s start by finding out what exact chicory coffee is.

What Is Chicory Coffee? 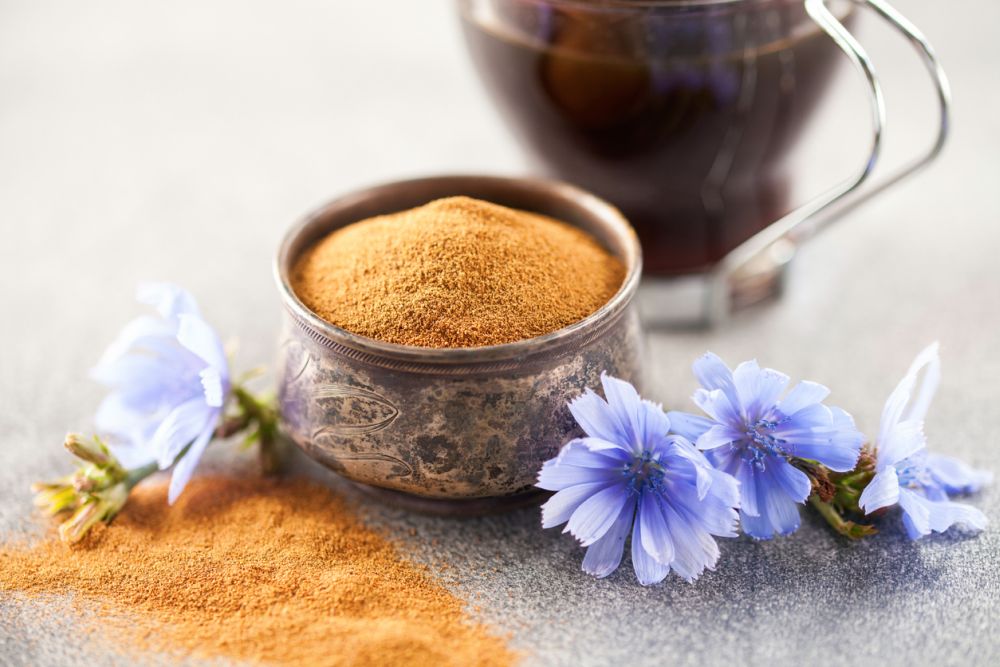 Chicory coffee is obtained by roasting the ground root of the chicory plant. It tastes similar to coffee but doesn’t contain any caffeine.

Common chicory (Cichorium intybus) is a herbaceous plant that belongs to the daisy family Asteraceae. It originated in Europe, but it eventually became naturalized in various parts, including the US, China, and Australia.

The leaves of chicory are cultivated for making all kinds of salads, while the roots are roasted and ground into a coffee substitute.

A more modern use for chicory is for the production of inulin, a natural sweetener with an extremely low glycemic index, which is a very good source of dietary fiber.

In the next section, let’s learn more about the history of coffee with chicory. 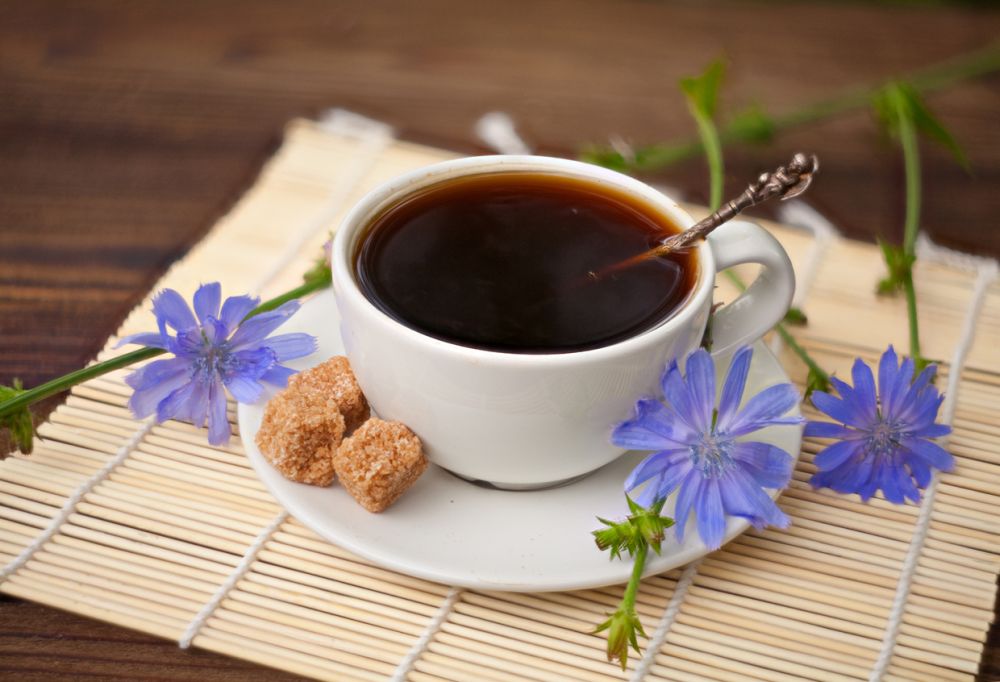 The use of chicory as a coffee adulterant or substitute started in 1766 when the leader of Prussia forbade the importation of coffee into the country, leaving the people to look for alternatives.

By the time of Napoleon, chicory was a common coffee replacement. And in some regions of France, people even skipped making coffee altogether in favor of chicory.

Thanks to early European colonists, chicory made its way to the US in the 17th century.

Confederate soldiers later popularized chicory during the American Civil War when the Union naval blockades limited the use of ports, limiting coffee importation into the area and eventually becoming a local traditional brew.

To find out more about coffee history, learn about the three coffee waves.

In the next section, let’s discover the health benefits of chicory root coffee.

The Health Benefits of Chicory in Coffee 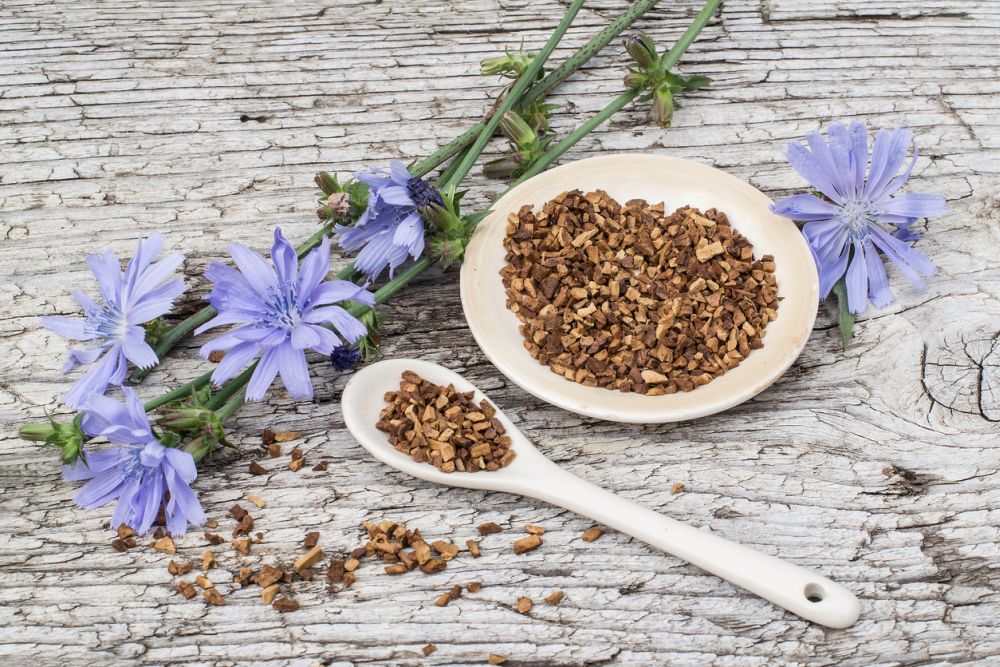 All parts of the chicory plants are consumed, including the leaves and the flower buds. And all parts have the same health benefits, such as:

In the next section, let’s check out the differences between chicory coffee and normal coffee.

The Differences Between Coffee with Chicory and Regular Coffee

Coffee with chicory is different from standard coffee regarding taste, digestion, blood sugar, inflammation, and caffeine.

Both chicory and coffee beans have a naturally bitter flavor with strong nutty and earthy undertones, so they complement each other. Some people may drink chicory and not be able to tell it apart from pure 100% coffee.

Sure enough, chicory matches dark roast coffee better since the taste of lighter roasts is brighter and more acidic.

Chicory root is rich in dietary fiber, which has a beneficial effect on our digestive system in the following ways:

While coffee may not contain fibers or inulin, the caffeine and other substances have similar effects:

In the following section, let’s check out blood sugar. 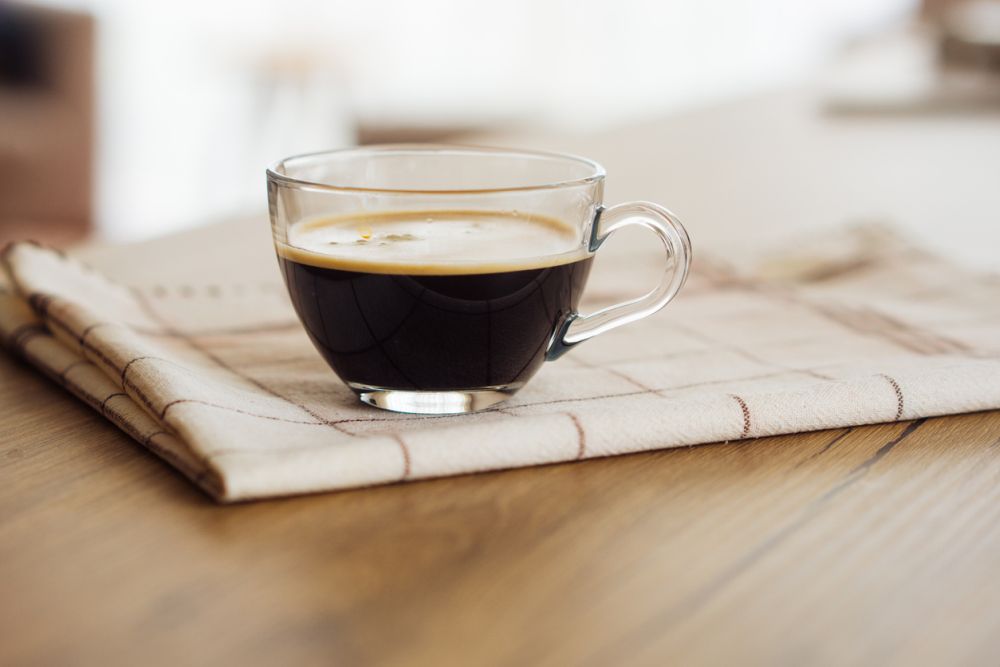 Black coffee is great for your health no matter how you look at it, and it seems that black chicory is even better.

Inulin is used worldwide as a sweetener and perfect for those suffering from insulin resistance, especially those with type 2 diabetes or obesity.

Caffeine can lower your insulin sensitivity, helping with your blood sugar levels.

In the next section, let’s look over inflammation.

Black coffee is praised for being rich in antioxidants and having a high concentration of phenolic acids, which are known for their anti-inflammatory properties that help reduce the risk of cancer, stroke, and heart disease.

Chicory root possesses some anti-inflammatory properties, too, reducing both inflammations and all associated ailments, including gout, heart disease, and cancer.

In the following section, let’s check out caffeine.

Coffee beans contain the highest recorded concentration of caffeine among all plants harvested for caffeine. In contrast, chicory root has no caffeine. So why would this be a criterion for working well together?

Many people are sensitive to caffeine. And while they could brew their coffee using fewer grounds or more water to reduce the caffeine content, the drink will taste bland and watered down.

That’s where chicory comes in – it can help reduce the concentration of caffeine in your cup while maintaining its flavor by basically acting as a filler.

If decaf coffee isn’t exactly your thing, chicory coffee may be the answer.

In the next section, let’s see the drawbacks of chicory coffee.

Drawbacks of Coffee with Chicory 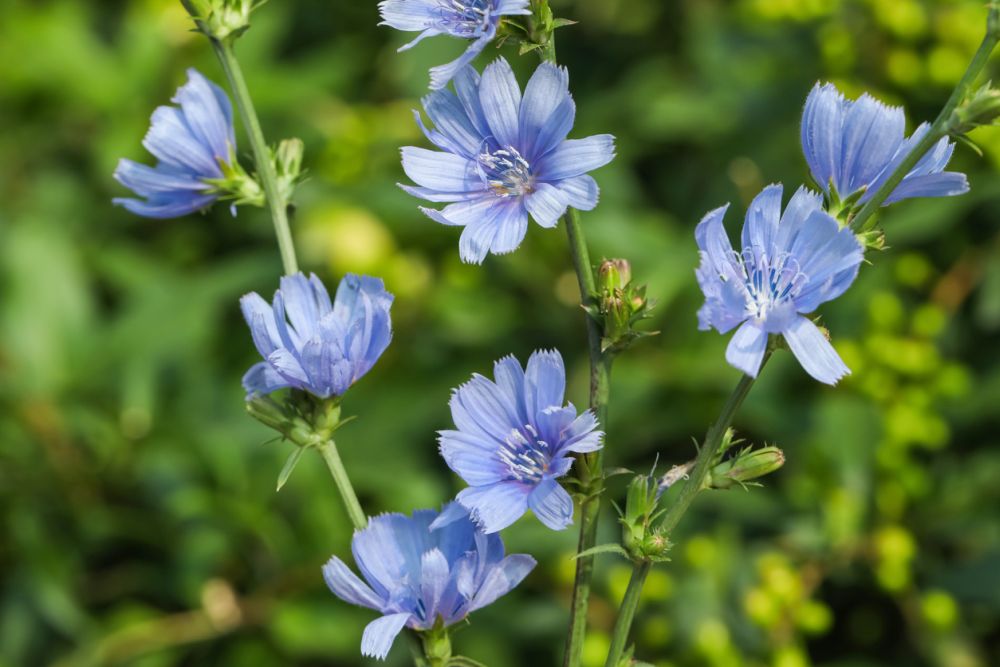 No matter how good something may seem at first, moderation is the key to everything, including chicory.

Like all foods and beverages, consuming too much chicory (or chicory coffee) may result in some issues, such as allergies and stomach sensitivity.

Chicory is considered an allergen. Common symptoms include pain, swelling, and a tingling sensation throughout your body, particularly the mouth.

People with pollen allergies, especially chicory-related plants, are advised not to consume chicory at all.

Moderately consumed chicory may help with digestion and bowel movements. Meanwhile, excessive chicory (or coffee) may result in the exact opposite, namely diarrhea, among other issues.

If you have a sensitive stomach, it’s best to avoid drinking chicory coffee since you don’t know what the effects of too much inulin and fiber will do to your body.

In the next section, you can find out the best chicory coffee brands. 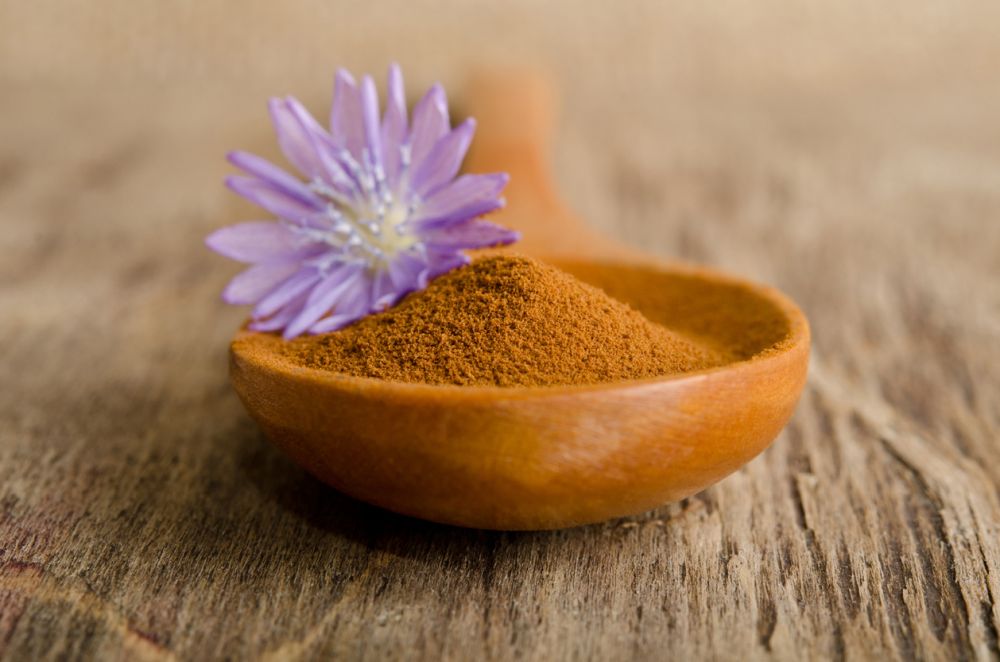 While mixing coffee and chicory may sound like a household thing, plenty of well-established coffee brands make chicory coffee blends.

Some chicory coffee brands are better than others, which makes choosing them all the more difficult, especially when you’re looking for a balance between quality, quantity, and price.

We’ve taken the liberty of gathering reviews and opinions on some of the best chicory coffee brands:

Each of these chicory coffee brands has its advantages and disadvantages, so it’s really up to you to decide which one suits you best. However, they’re worth trying out at least once, especially if you’re looking for a change from your regular cup of joe.

In the next section, you can find out more information about coffee with chicory. 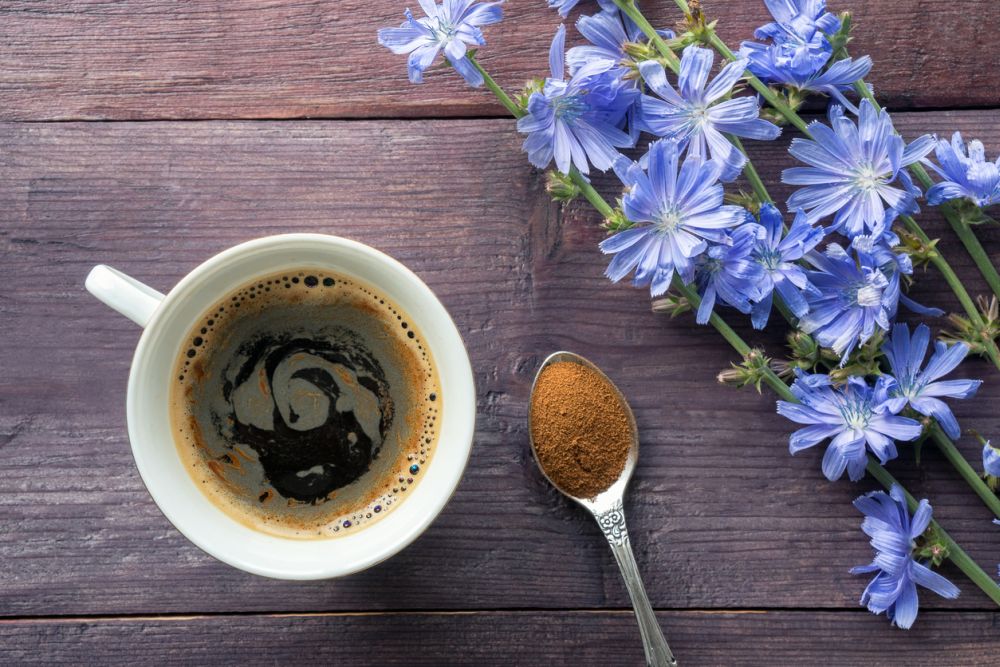 This section gives you simple answers to common questions about coffee with chicory.

Why do they put chicory in coffee?

The main reason why some add chicory to coffee is that after being roasted and ground, they both produce a beverage that looks identical and tastes very similar. So chicory is one of the most common coffee substitutes worldwide.

Is chicory in coffee harmful?

Chicory has many health benefits, especially on the digestive system, but consuming too much chicory can result in stomach issues, such as pain, cramps, and diarrhea.

What brands of coffee contain chicory?

Some of the best coffee chicory brands are Community Coffee, Cafe Du Monde, and French Market.

How do you make chicory coffee taste good?

The next and final section summarizes the entire article on coffee with chicory.

Chicory coffee is a pretty interesting drink. While it has its fair share of benefits, there are also some drawbacks you should be aware of before you start consuming it regularly.

We think it’s worth trying out at least once, especially if you’re looking for an alternative to your regular cup of joe.

What’s your take on coffee with chicory? Let us know in the comments below!