If you’re looking for a delicious coffee fix but don’t know whether to go for a flat white or cappuccino, this article is for you. Learn the differences between flat white vs cappuccino to see which one suits you better. 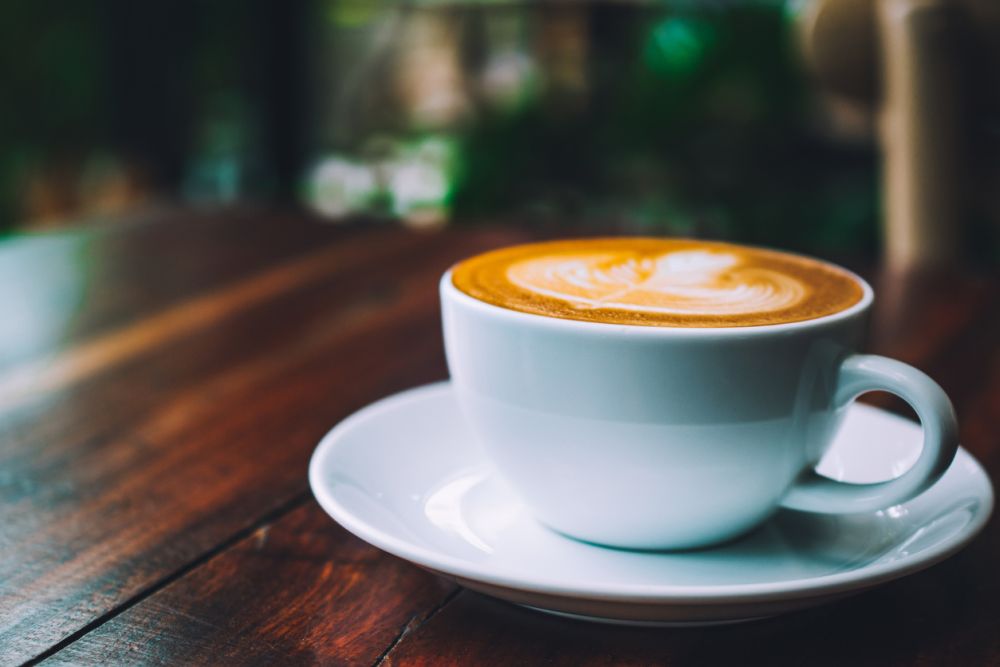 When coffee houses boomed, it seemed for a while that their menus would receive new drinks with each day.

While variety is a blessing for coffee, not knowing what you’re about to order can be a bit offputting, especially with all those fancy Italian-sounding names.

If you’re among those that would try to add a bit of variety to their lives but hesitate because you don’t like surprises very much, this guide is for you.

This article discusses two of the most commonly ordered coffee drinks – flat white and cappuccino.

Flat White vs Cappuccino: Everything You Need to Know

You might think that flat white and cappuccino are the same, especially since they both have milk.

But the difference mainly lies in two things: milk-to-coffee ratio and milk texture. Well, there’s also size and taste. But size can vary, and taste is subjective, so we’re focusing on what matters most.

What Is Flat White? 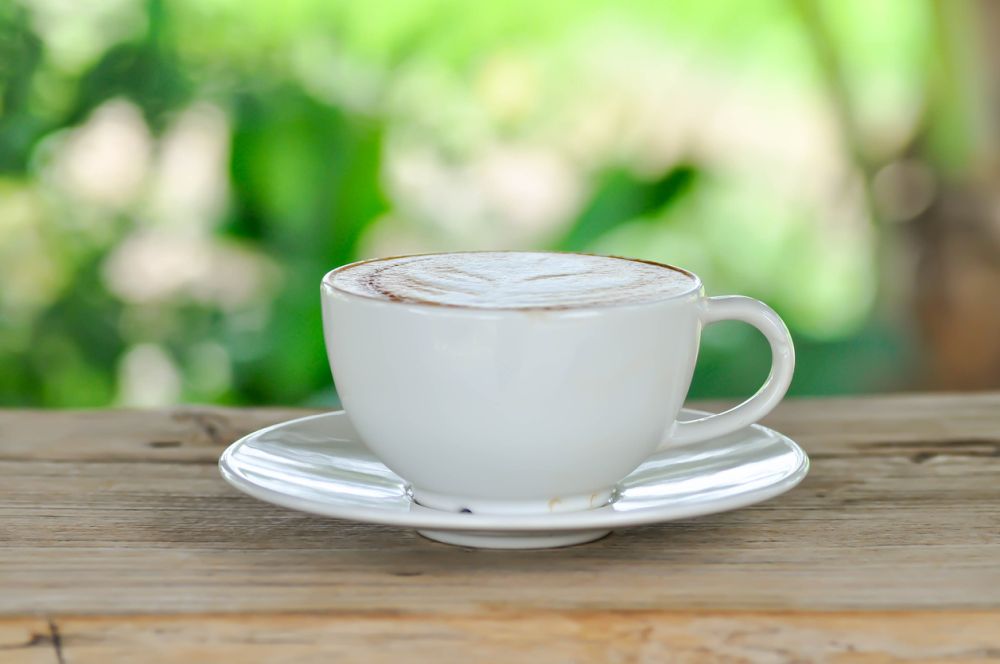 A flat white is a coffee made with espresso and steamed milk. The milk is usually steamed to create microfoam, which gives the drink a velvety texture.

Rumor has it that flat whites were created in Australia in the 1980s, but there’s no conclusive evidence. The term was initially recorded in New Zealand in 1984, in a café called Dixie Belle’s Coffee Lounge.

Nowadays, flat whites are everywhere, and they’re trendy in Australia, New Zealand, the United Kingdom, and the United States.

While it doesn’t share the same popularity as lattes, macchiatos, or cappuccinos, that’s slowly improving.

Thanks to the relatively simple taste, people are getting into flat whites – not too milky, not too strong, but just right. It’s also a fantastic alternative for those looking for something less sweet than a latte but not strong as espresso. 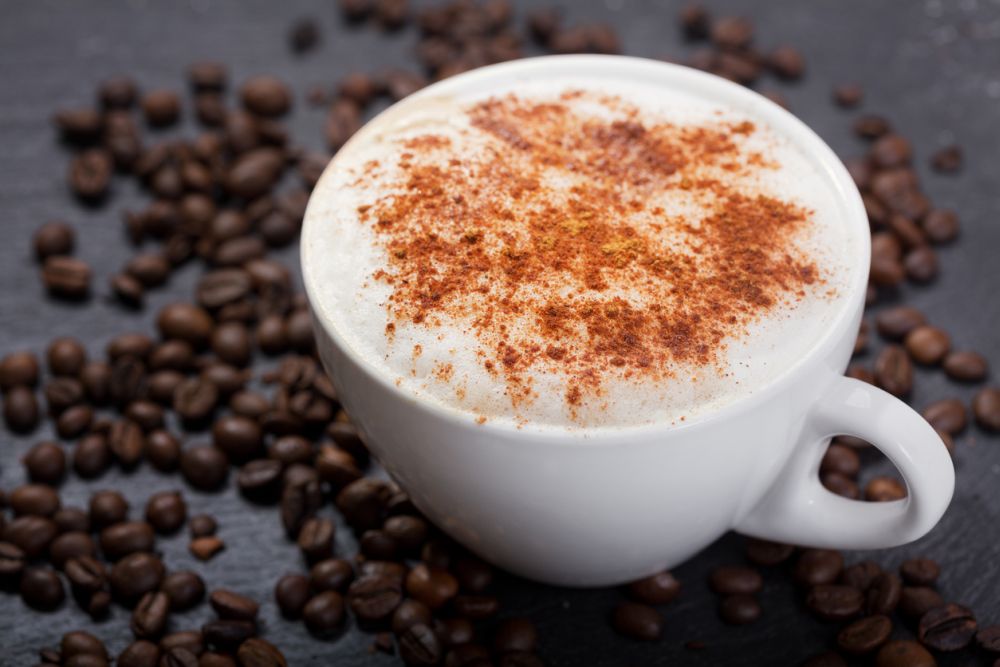 A cappuccino is a coffee made with espresso and steamed milk, just like the flat white. The difference is the milk-to-coffee ratio – usually 1:2 or 1:3 in a cappuccino.

Like the flat white, the cappuccino’s milk is steamed to produce microfoam, creating a velvety texture. It has a 5-6 oz. (150-180 ml.) standard size.

Cappuccinos come from Italy, with the term first being recorded in 1930. An Italian named Luigi Bezzera invented the drink, adding milk to his espresso to cut down on the bitterness.

It’s said that the name for cappuccino comes from the similarity of their color to the robes worn by Catholic priests, which are called cappuccios.

Cappuccinos are among the most popular coffee drinks consumed worldwide. They’re usually served in coffee houses and cafes in the morning due to the high caffeine content, but you can also find them in some restaurants.

Additionally, cappuccino has various flavors, such as chocolate, vanilla, caramel, and pumpkin spice.

Differences between Flat White vs Cappuccino

Now that we know what each drink is, let’s move on to the differences between the two: 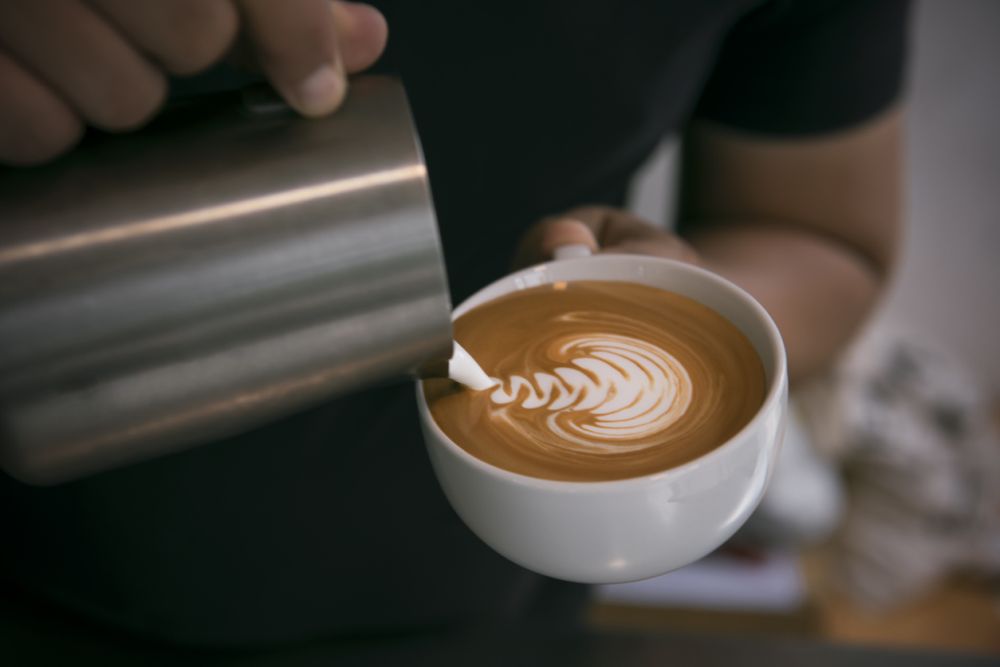 Although flat white and cappuccino use the same ingredients, the composition has subtle differences.

The most notable one is the milk-to-coffee ratio – 1:1 for flat white (can vary from 1:2 to 2:3) and 1:2 or 1:3 for cappuccino. It means that a flat white has more coffee than milk, while a cappuccino has more milk than coffee.

Cappuccinos, on the other hand, are generally brewed from just one shot of espresso and steamed milk. Since they are typically smaller than flat whites, they have a higher milk-to-coffee ratio.

Although it has the same amount of milk as a flat white, a cappuccino has a higher milk-to-coffee ratio, which produces a milkier drink. 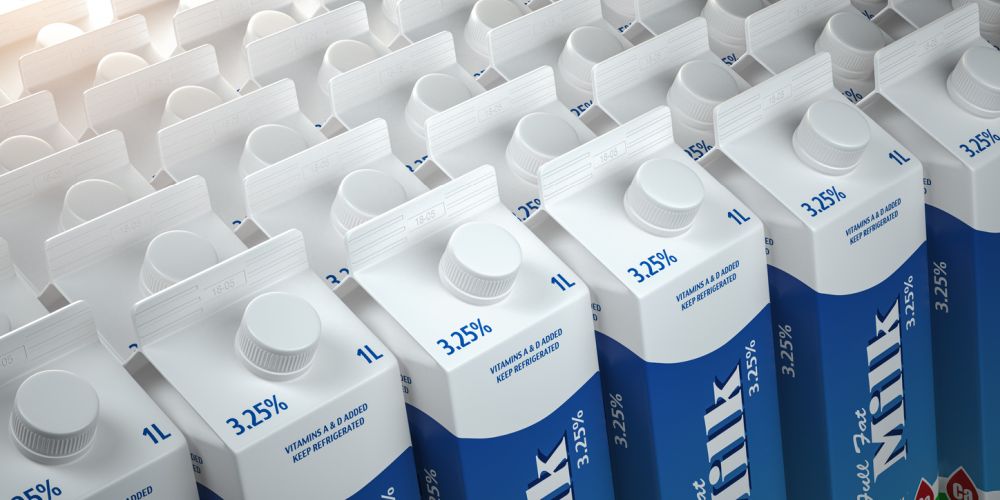 Whole milk is generally used for a cappuccino because it creates a rich and creamy foam; the higher fat content also gives the drink a richer flavor.

On the other hand, for a flat white, baristas typically add steamed skim milk to a flat white; it’s lower in fat, so the foam is poorer.

However, it’s quicker to steam skim milk than whole milk, making it better for flat whites.

The milk type is up to you or your barista. But use skim milk for a flat white and whole milk for a cappuccino to make the drink as authentic as possible.

So if you don’t know whether you’re drinking cappuccino or flat white, feel the milk’s texture and taste: foamy and thick for a cappuccino, or smooth and creamy but not foamy for a flat white.

More so, you can correlate that with the aroma’s boldness, which is fainter in cappuccino since it contains less espresso.

An interesting fact: cappuccino was made with hot milk and a lot of foamed milk in its earlier days. Baristas currently prefer to brew it with steamed milk. 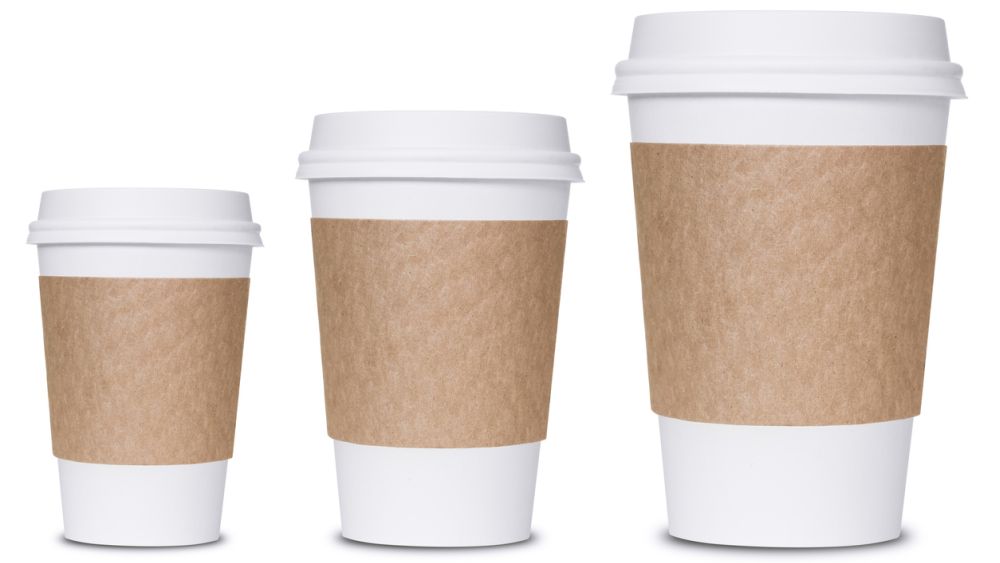 Suppose you have your drink at a coffee house that uses the same paper or styrofoam cup for all coffee types. It might not be noticeable, but cappuccinos and flat whites come in different sizes.

A cappuccino usually has a smaller serving size. But there are variations, depending on the country or coffee house you’re in.

It’s because cappuccinos have less coffee than flat whites. And it’s also a matter of coffee house etiquette.

Some coffee houses ask their customers about personalizing their drinks. For instance, you can request more milk and a single shot of espresso if your flat white is too strong. Of course, that would lead you straight to a cappuccino – but to each its own, right?

However, if you’re the kind of person that cares a lot about having the authentic experience, take the drink size into account to learn how to tell apart flat white vs cappuccino.

The difference in taste between these two drinks is subtle, but it’s there.

Since a flat white has more coffee than a cappuccino, it has a stronger and more bitter flavor. Furthermore, the flat white milk is not as sweet as the cappuccino milk due to the lower fat content.

On the other hand, a cappuccino has a milder coffee flavor due to the higher milk-to-coffee ratio. The milk is also sweeter since it has a higher fat content.

The taste difference is up to personal preference: you probably prefer a flat white if you like your coffee strong and bitter, or a cappuccino if you go for milder and sweeter.

But if you can’t decide, don’t worry – you’re not alone. Many coffee houses have both options on the menus these days, so you can order both. 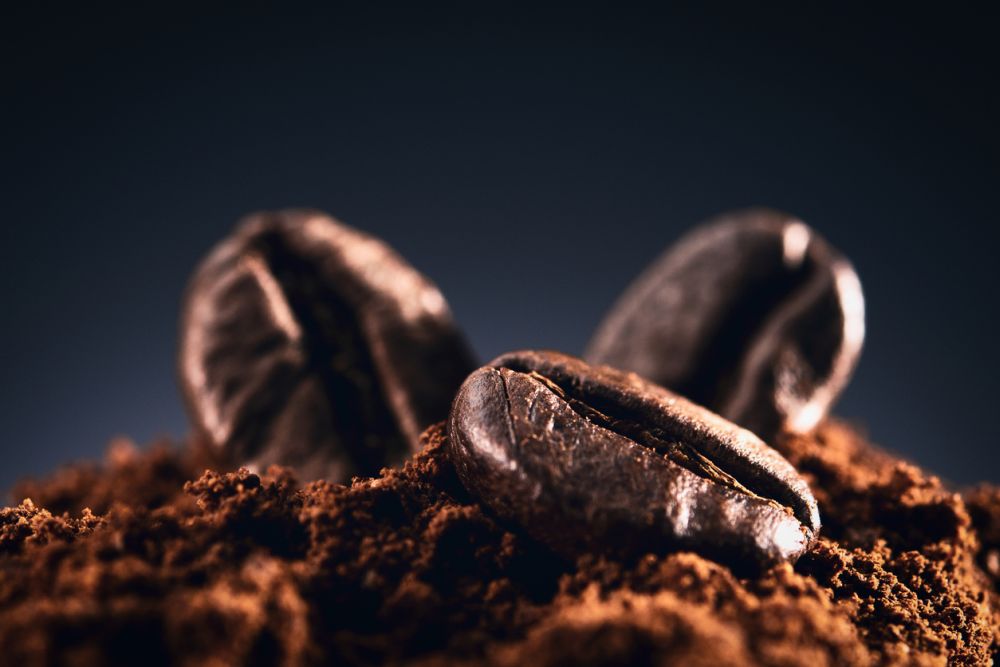 The caffeine content in flat white vs cappuccino is as subtle as the taste but also worth mentioning.

A flat white has more caffeine since it contains more coffee than a cappuccino.

So if you’re trying to cut down on your caffeine intake, go for a cappuccino. On the other hand, a flat white is your best bet if you need a caffeine boost.

The nutritional content is not that different in flat white vs cappuccino, so you don’t have to worry about this if you’re watching your weight.

A flat white has slightly fewer calories than a cappuccino because it has less milk and sugar.

If you’re strict about your calorie intake or trying to cut down on sugar, choose a flat white.

What to Choose Between Flat White vs Cappuccino?

Now that you know the difference between a flat white vs cappuccino, which one is best for you? There’s no straight answer since taste is subjective.

But here’s a list of pointers to help you make an educated choice: 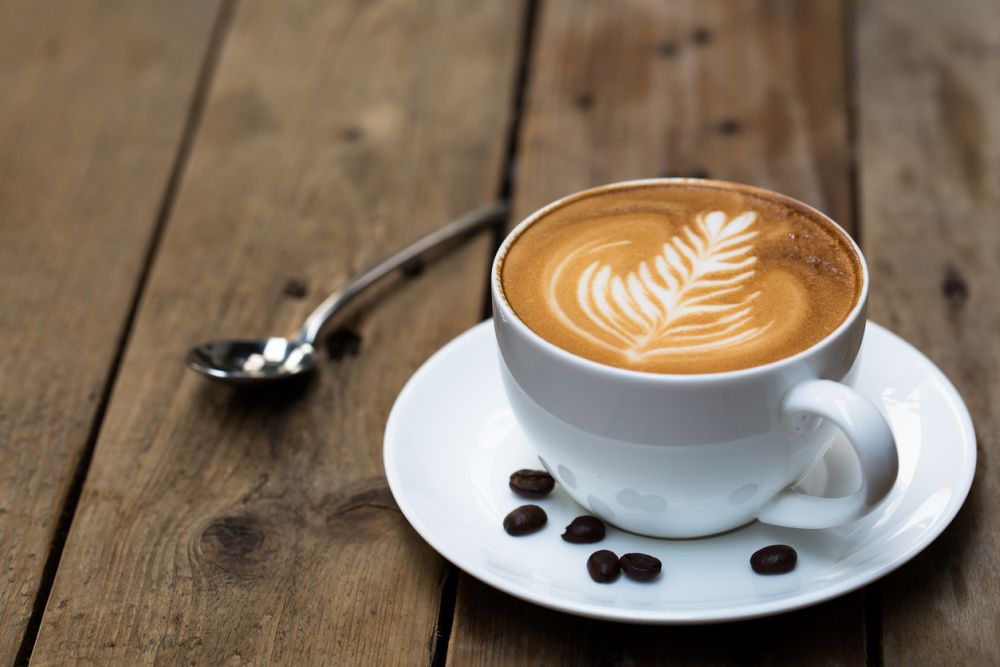 Is a cappuccino stronger than a flat white?

No. The strength difference is subtle – a flat white has a slightly stronger coffee flavor because it has more coffee.

Is a flat white just a cappuccino?

No. While these two drinks are quite similar, they vary by milk-to-coffee ratio, milk type, and caffeine content.

What is the difference between flat white latte and cappuccino?

It’s the milk-to-coffee ratio. A flat white has more coffee, meaning a stronger coffee flavor. Plus, a cappuccino has foam on top.

Is flat white the strongest coffee?

No. Flat white coffee is slightly stronger than cappuccino coffee due to the higher coffee-to-milk ratio. However, you can try various types of strong coffee like espresso.

What’s the difference between a flat white and a cafe au lait?

It’s the milk-to-coffee ratio. A flat white has more coffee, creating a stronger coffee flavor. Furthermore, a cafe au lait is made with whole milk, while a flat white is usually made with skimmed milk.

Is a flat white stronger than a latte?

Is a flat white better than a cappuccino?

It’s a matter of opinion. Flat white and cappuccino are both excellent coffees, although they have different flavors. A flat white has a stronger coffee flavor, while a cappuccino is sweeter and milder.

What is healthier, flat white or cappuccino?

A flat white is typically healthier than a cappuccino because it has less milk and sugar. But it depends on how the drink is made. If a cappuccino is made with skimmed milk and no sugar, it can be just as healthy as a flat white.

Why is it called a flat white?

The term flat white comes from coffee having less milk than a latte or cappuccino, which gives it a flatter appearance. The milk also doesn’t froth, further adding to the flat effect.

So, which coffee is best for you when it comes to flat white vs cappuccino? It all comes down to personal preference: go for a flat white if you like a strong coffee flavor, or choose a cappuccino if you prefer a sweeter and milder coffee.

And if you’re trying to cut down on your caffeine intake, opt for a cappuccino since it has less coffee than a flat white. However, both coffees are delicious, and you really can’t go wrong with either one.