If you’re looking for a pick-me-up that packs a punch or a pre-workout energizer, nitro coffee is the answer. This supercharged adds an extra boost of energy and has no bitter aftertaste. 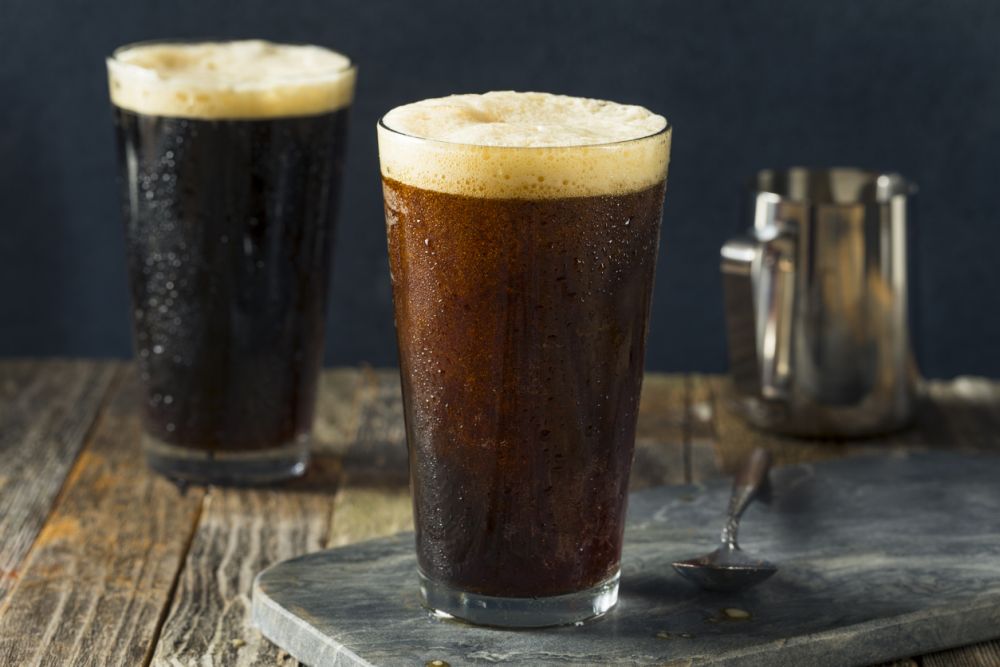 You probably know about espresso, drip-brew coffee, French press, and other popular brewing methods if you’re an average coffee lover. But have you ever heard about nitro coffee?

Well, it seems that it’s becoming more and more popular. And in today’s article, we are deconstructing nitro coffee to see what it exactly is and if it’s worth trying.

What Is Nitro Coffee?

Also known as nitro cold brew, nitro coffee is a cold-brew coffee served chilled with an infusion of nitrogen gas that gives it an extremely smooth and creamy texture without needing extra milk or cream.

Research done by Esquire revealed that the concept for nitro brew coffee may have originated from a small New York coffee shop called The Queens Kickshaw.

On the other hand, an article from Men’s Journal claims that the idea was thought up at the Cuvee Coffee craft coffee houses in Austin, Texas.

Furthermore, Perfect Brew claims that nitro coffee was invented by Nate Armburst in Portland, Oregon in 2013.

Unfortunately, it’s hard to track down exactly who came up with the idea of creating carbonated coffee. But one thing is for sure: it started somewhere during the 2010s, and it was only available in third-wave coffee shops.

At first, coffee that tastes like beer sounds like something that wouldn’t hold up in the long run. However, according to a graph from Grand View Research, the market share for nitrogen-infused coffee is rising at an almost exponential level.

A few years after entering mainstream markets, nitro coffee finally transitioned from a tap-only beverage to a canned drink by 2015.

By 2016, Starbucks made the beverage available in over 500 stores; over half of its establishments had it on their menu in 2020. 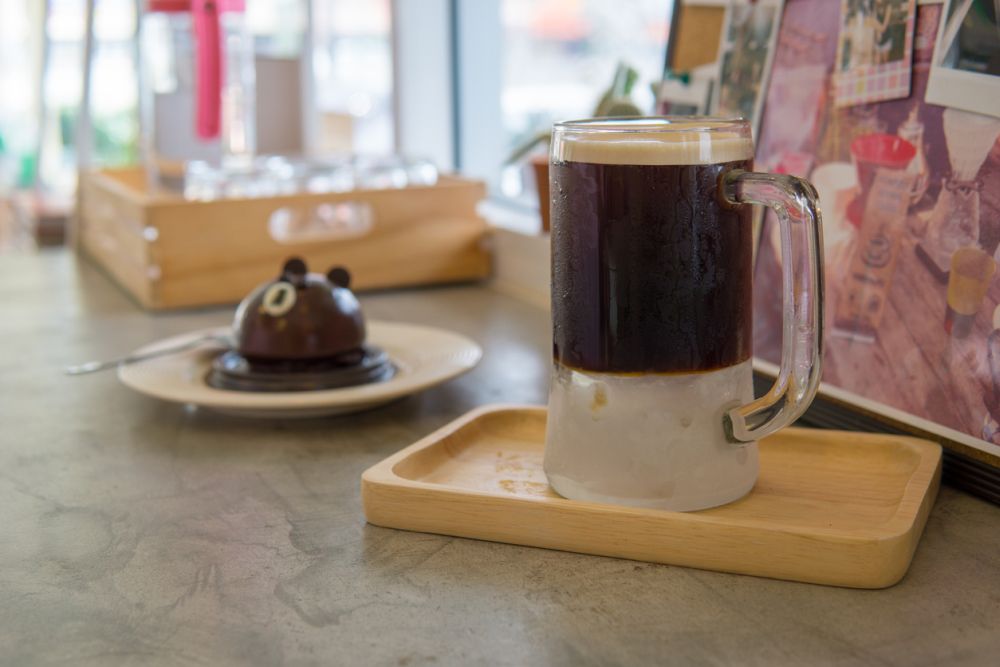 Adding gases to beverages is not something new since we’ve been doing it for decades to make soda.

For example, if you’re familiar with how CO2 is added to water or other liquids to make them bubbly, making nitro coffee will be no mystery familiar to you.

The same principles are applied – brewers use a CO2 tank to inject nitrogen gas into cold brewed coffee. However, since it’s not carbonated like soda, it doesn’t come out fizzy.

Nitrogen is also used in dark stout beers to give them a richer and thicker texture and feel.

Nitro Cold Brew vs Cold Brew – What are the Differences?

Technically speaking, nitro cold brew is cold brew coffee with gas infused. Still, because nitrogen has certain chemical properties that we’ll be talking about later, it completely changes the feel of the coffee:

Nitrogen is colorless, odorless, and tasteless, so the gas itself will have no effect on the nitro coffee’s flavor.

However, while nitrogen doesn’t change the coffee taste from a chemical standpoint, it does change it by tricking the tongue, thanks to its texture.

It’s because so many bubbles hide the coffee’s natural bitterness and make it feel significantly sweeter.

Since cold-brew coffee has a milder taste than hot brew coffee, the added effect of nitrogen is all too welcome.

At first, glance, making nitro coffee should result in something that looks and feels like fizzy coffee. But the secret to nitro beer lies in the fact that nitrogen doesn’t dissolve as easily as CO2.

Because of this, the bubbles are smaller and last longer; imagine that the entire coffee is pretty much the espresso crema from top to bottom.

Texture is the main reason so many people choose nitro cold brew coffee since it’s not necessary to add extra cream or other dairy products.

On the other hand, regular cold-brew coffee has the same basic watery texture as any other type of coffee, so it’s easy to see why consumers choose one over the other.

Since the added nitrogen has no nutritional value whatsoever, the amount of caffeine in a single serving is the same as if you were drinking the cold brew coffee directly.

For example, according to an infographic from Caffeine Informer, a 16 oz. serving of Starbucks nitro cold brew contains around 280 mg of caffeine.

While this may sound like a lot, remember that the serving size is quite large (regular hot coffee is served in 8 oz. cups), so the caffeine is also diluted.

Anyone would want to add cream to coffee to make it sweeter and creamier. However, you’ve already achieved that without any of the added calories with nitro cold brew coffee.

The natural sweetness given by the nitrogen infusion to the brew makes it so that you don’t need to add any more sugar.

The nitrogen bubbles do such a good job at making the beverage feel creamier and silkier, that adding any extra cream would just make it feel too heavy.

As far as acidity is concerned, nitro and cold brew coffee are equals. Both are some of the best low-acid coffees, which is excellent news for those with sensitive stomachs.

While the concept of creating nitro coffee is relatively new, the fact that special equipment is needed to create this brew limited the ability of regular home users to make their nitro cold brew.

However, companies eventually realized that a pretty penny could be made from selling the beverage and the equipment needed to make it.

So, if you fell head-over-heels for this frothing beverage, here are some great nitro cold brew coffee makers that you should try out: 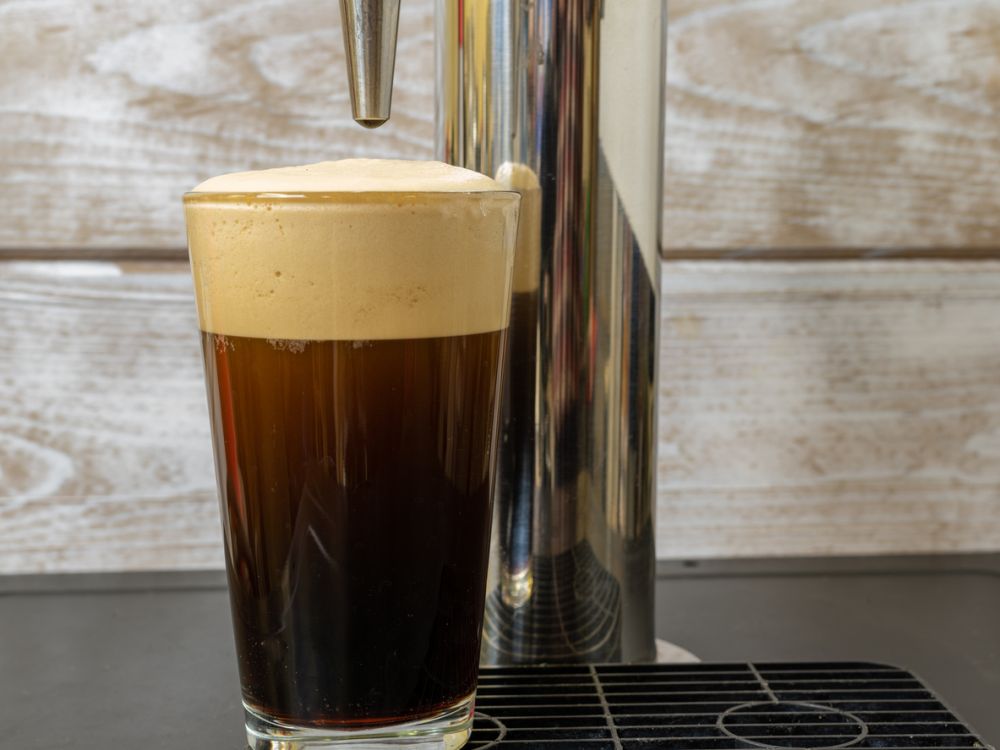 How to Build a Homemade Nitro Coffee Machine

Unfortunately, not everyone has the money to spend on at-home nitrogen infusers. But there are ways to make nitro cold brew coffee at home, even if you’re on a tighter budget:

The only real downside to this method is that nitrogen gas canisters don’t last very long. So while you won’t be spending a lot of money upfront on the coffee maker itself, this will change in the long run.

Since nitro coffee is such a new topic for many, it’s perfectly normal if there are still some questions about it:

What is the Starbucks nitro cold brew caffeine content?

According to Starbucks’ menu, a 16 oz. serving of nitro cold brew has around 280 mg of caffeine, making it a very potent drink.

What is nitro beer?

Nitro beer can be considered the inspiration for nitro coffee. It’s a beer that has been infused with nitrogen gas instead of the traditional CO2, which gives it a very creamy and frothy texture. One of the most popular nitro beers on the market is Guinness Draught.

No. While a serving of nitro cold brew does have a lot of caffeine, it’s made using cold brew coffee that has been steeped for 24 hours (sometimes several days). Also, the serving sizes are quite large (12-16 oz.). But nitrogen doesn’t affect the caffeine contents.

Does Guinness Nitro have caffeine?

No. None of the Guinness beers on the market today have any kind of added caffeine, including nitro beer.

What’s the difference between nitro cold brew and regular coffee?

The nitrogen gas changes the drink’s texture and appearance. As such, nitro cold brew is much creamier and has a more frothy head, while regular coffee is more watery and doesn’t have any bubbles.

To recap, nitro coffee is a frothy, creamy, and potent beverage that has been rapidly gaining in popularity over the past few years. It can be made using various methods, but the most popular way to drink it is from a specialty cafe.

If you’re looking for a new coffee experience or just curious about what all the fuss is about, we recommend that you give nitro cold brew coffee a try. It’s become one of our favorite drinks.